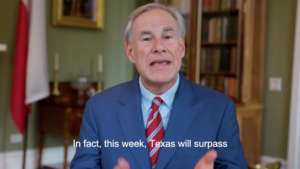 Governor Abbott announced the executive order on Tuesday, noting that 13 million doses of the COVID vaccine have already been given in Texas, claiming that a “return to normalcy” was permitted via taking the vaccine. Abbott noted that the vaccines are meant to be “voluntary, and never forced,” and that “government should not require any Texan to show proof of vaccination and require private health information just to go about their daily lives.”

“We will continue to vaccinate more Texans and protect public health, and we will do so without treading on Texans’s personal freedoms,” Abbott said in a video released along with the executive order.

Texans shouldn't be required to show proof of vaccination & reveal private health information just to go about their daily lives.

I issued an Executive Order that prohibits government-mandated vaccine passports in Texas.