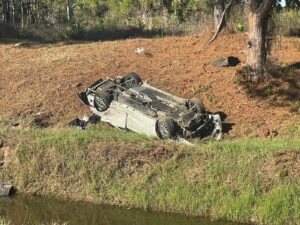 During the early morning hours of February 25th, a traffic stop was conducted on a white Infiniti for a faulty tail light in the area of Tamiami Trail and Adalia Terrace. Law enforcement made contact with the driver who originally provided deputies with a false name. Throughout their investigation, deputies were able to correctly identify the driver as Glen Alonzo Steele (04-03-65). Communications alerted deputies of an active Charlotte County warrant for Steele for failure to appear on a 2019 traffic charge.

Steele continued fleeing into North Port city limits where he drove through a wooded area rolling the vehicle several times over a small canal and ultimately landed upside down. Both suspect and CCSO member were flown to a local hospital. Steele is in custody at this time as he receives medical care for a suspected head injury.

We are happy to inform the public that the deputy involved has been released from the hospital sustaining only minor injuries. We would like to thank you for all of your thoughts and concerns for the safety and well-being of our agency member.

This is an extremely active case with multiple charges pending for Glen Alonzo Steele. Updates will be forthcoming and will be posted here.