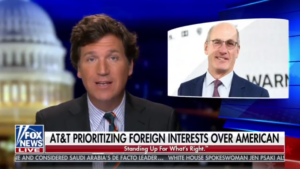 National File originally reported that AT&T petitioned the United States government to allow it to continue working with China Telecom, a company wholly owned by the Chinese Communist government, that former Undersecretary of Commerce Corey Stewart revealed gives location data about members of the Uyghur ethnic minority and other dissidents to the Chinese government so they can arrest and send them to concentration camps.

After Stewart appeared on Tucker Carlson Tonight to discuss National File’s reporting, AT&T doubled down, defending its decision to work with and lobby on behalf of a CCP-controlled company that allegedly assists in what the U.S. State Department considers a “genocide” of an ethnic minority.

Tucker Carlson was joined by Corey Stewart to discuss AT&T lobbying the U.S. Government to allow it to work with a CCP-owned telecom giant, as was originally reported by National File. pic.twitter.com/l0DexMOeqA