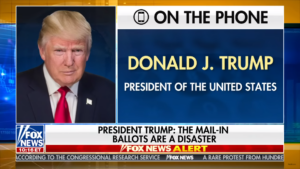 Trump: ‘We Don’t Have Freedom of the Press in This Country — We Have Suppression by the Press’

My site is a prime example of this, they shut down my national news page w over 700k fans because I was exposing BLM a couple years ago.  Now they are threatening to shut down the Scoop after my interview with a local chapter of the proud boys, regarding a local issue involving them.  It involved no politics and no hate, but FB deemed it hateful.  You can still see that interview on Youtube by clicking — >>> here.  Facebook thought they would kill the interview by taking down my live video, after 6k views.  They were wrong. 🙂

During an interview that aired on Fox News Channel’s “Sunday Morning Futures,” President Donald Trump attacked the media for its unwillingness to cover stories that could cast Joe Biden’s candidacy and his presidential chances in a negative way.

Trump called it “suppression by the press” during a phone-in interview with Fox News’ Maria Bartiromo.