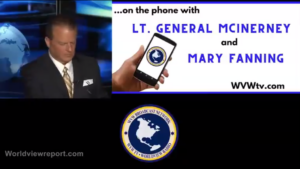 The former General also suggested that the term “Kraken,” widely used by Attorney Sidney Powell, is referring to the 305th Military Intelligence Battalion, which is located on Fort Huachuca, Arizona. McInerney clarified that Powell had been using data provided by the 305th, and others, as fuel for legal battles, including her Georgia lawsuit, which alleges that the Chinese, Russians, and Iranians used Dominion to interfere in the 2020 U.S. Presidential election.

“Sidney and the President through, I believe, General Flynn, have got the ‘Kraken’ organization, the 305 Military Intelligence Battalion, working with them,” said McInerney. “Because in all of this, we have not seen any footprints of the DOJ, of the FBI, nor the CIA on the friendly side. It’s been on the ‘Deep State’ side.”