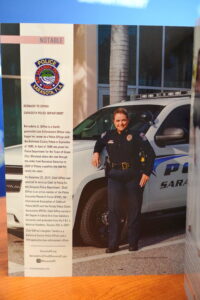 Sarasota Police Chief Bernadette DiPino has been featured in the inaugural launch of KNOW Sarasota.  Chief DiPino is featured as a Notable on page 74 of the magazine, sharing she is a fourth-generation law enforcement officer who began her career in Baltimore County, Maryland.  On December 31, 2012, Chief DiPino was selected to lead the Sarasota Police Department.

“I’m humbled to have this recognition in KNOW Sarasota,” said Chief DiPino.  “To be highlighted among the best of the best women in our community and throughout our county is an absolute honor.  I’m joined by more than 75 other women who are dedicated to uplift and highlight women in the workforce and that’s incredible,” said Chief DiPino.

KNOW Sarasota is an annual publication that features dynamic women in nearly every industry.  Every woman featured in the magazine has been vetted through peer-review.  According to KNOW Sarasota, those published are considered trendsetters, influencers, and women to watch.  To learn more about KNOW Sarasota, visit www.theknowwomen.com