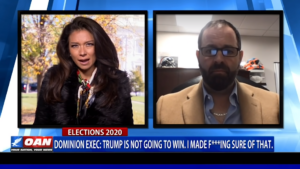 DOMINION: Eric Coomer Allegedly Bragged He ‘Made F**king Sure’ That ‘Trump’s Not Gonna Win’

A September 27, 2020, conference call between leaders of several activist groups found one participant so alarmed by a statement made by a Dominion Voting Systems higher-up that he decided he had to go public with what he knew.

The founder of a group called Faith Education Commerce United, Joe Oltmann, who infiltrated the conference call believing that he was gaining opposition intelligence on Antifa, told reporters the conference call took place on September 27, 2020. Other participants on the call, Oltmann says, were leaders of Antifa and other groups that vehemently opposed the re-election of President Trump.

Oltmann alleged to reporters that one of the participants on the conference call was a key leadership team member of Dominion Voting Systems.

As the call ramped up, Oltmann said he was told that one of the participants would be “Eric from Dominion” would be on the call. He later stated he was confident the identify of that person was Dominion employee Eric Coomer.