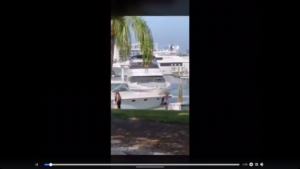 Watch: Whoops! A boat smashes into another boat at Marina Jacks in Sarasota moments ago

I am being told that the SPD charged the boat operated w driving under the influence.

A boat crash happened earlier today at Marina Jacks in Sarasota. In the video, you can hear people telling the driver to stop as crashes into docked boats. Witnesses say the driver was arrested.
(🎥 via Kayla McLaughlin) @mysuncoast pic.twitter.com/AYfH2Qy1Wk