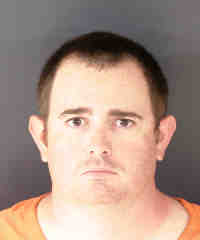 Sarasota man shoots at another driver, during a road rage incident on 75 in North Port

Joshua Powenski may be in a bit a trouble based upon the charges that were leveled against him (below) and the information on the Probable Cause Affidavit.

For some crazy reason, Joshua thought it made sense to pull out a gun and shoot it at a truck driver, while driving down 75.   According to the PCA, Joshua had some altercation with an individual.

The FHP showed up on the scene and found Joshua’s car on the side of the road, with his wife, who was the passenger.  The officer noticed a small hole in the window, which occurred from inside the car.

Joshua and his wife stated that an individual in a F150 was trying to force them into the emergency lane, near Sumter on 75 NB.   They feared for their life, so Joshua who was driving at the time, shot his Springfield 911 firearm through the window at the truck.   After that, he pulled over into the emergency lane and called 911.

The police tried to locate the driver of the vehicle but have not been able to talk with that individual.  Joshua was arrested for firing his firearm from a vehicle within 1000 feet of a person.