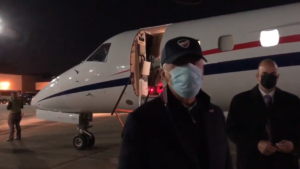 Tonight Democrat presidential candidate Joe Biden finally publicly commented on the stunning New York Post stories that show emails of Hunter Biden offering access to his father, then vice president of the United States, and discussing deals that would be advantageous to his family.

Biden called it a “smear campaign” and attacked the CBS journalist who asked about the story.

Speaking while masked to the media outside his chartered jet as it prepared to take off, Biden was asked by CBS journalist Bo Erickson about the explosive series of articles by the Post, “Mr. Biden, what is your response to the New York Post story about your son, sir?”

Biden proceeded to declare the story a “smear campaign” and attacked the character of the CBS journalist.

I asked Joe Biden: What is your response to the NYPost story about your son, sir?

He called it a “smear campaign” and then went after me. “I know you’d ask it. I have no response, it’s another smear campaign, right up your alley, those are the questions you always ask.” pic.twitter.com/Eo6VD4TqxD

“I know you’d ask it, I have no response, it’s another smear campaign,” said Biden, before directing his attack at Erickson. “Right up your alley, it’s the sort of question you always ask.” On Twitter, Erickson said he felt Biden “went after” him for asking about the viral headline.