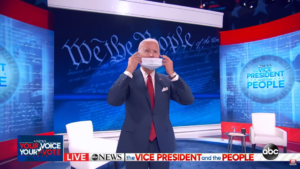 ABC News’ George Stephanopoulos failed to ask former Vice President Joe Biden at a town hall Thursday night about new email evidence that his son, Hunter Biden, arranged a meeting with him for an adviser to the corrupt Ukrainian energy company Burisma in 2015.

As Breitbart News noted Wednesday, the New York Post reported on emails it had obtained from an abandoned laptop in which Hunter Biden’s correspondence with a senior Burisma official was preserved.

The mainstream media attempted to ignore the story, and social media companies suppressed or blocked it, provoking complaints about censorship and leading Republicans to announce that they would subpoena Twitter CEO Jack Dorsey.

Many Trump voters who tune in to ABC tonight will be fully expecting the anchor to invite “undecided voters” to ask the former vice president if he thinks the President is being mean to the Biden family. Mr. Stephanopoulos could also dodge the issue by inviting Mr. Biden to share his opinion of the New York Post.

On the other hand, tonight also represents an opportunity for ABC to set itself apart from the raft of media companies, new and old, that have dedicated the last 36 hours to suppressing a damning report about their favorite candidate. Regardless of the particulars of the Post reporting, Hunter Biden’s overseas windfalls have been clear for a while. ABC should hold the former vice president to account for the abuse of his office.

Despite having 90 minutes in which to ask Biden the question, Stephanopoulos never did so, nor did anyone in the audience.