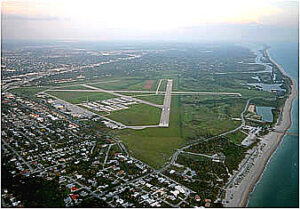 According to City Airport Director Mark Cervasio, a male pilot who is a tenant at the Airport was attempting to hand prop a single-engine plane, an alternate way of starting the aircraft. The male was in front of the plane, which started up. The plane’s propeller grazed the man’s head and struck him in the wrist and hip. He was ground transported to Sarasota Memorial Hospital for his injuries.

Once the aircraft started up, it traveled across the taxilane and struck a hangar, then came to rest, Cervasio said.

The Federal Aviation Administration (FAA) and National Transportation Safety Board (NTSB) are investigating the incident. No further information is being released at this time.