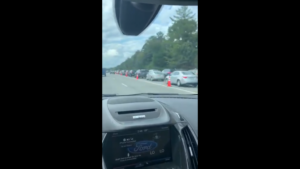 The economic recovery has stalled, and in some cases, reversed.

The $600 unemployment benefits that Americans received following the virus pandemic that crashed the economy in March-April expired on July 31, which means a fiscal cliff has been underway for 44 days (as of Sept. 14).

Millions of people are still out of work, their emergency savings wiped out, and insurmountable debts are increasing. As former Federal Reserve Chair Janet Yellen warned in August, Congress’ inability to pass another round of stimulus checks could weigh on the economic recovery.

Readers may recall about a quarter of all personal income is derived from the government – so when a lapse in stimulus checks extends for well over one month – that could lead to new consumer stress.

In Richmond, Virginia, about 125 miles south of Washington, D.C., a food bank has been shelling out more than one million meals per month as the metro area battles deep economic scarring sustained by the virus-induced recession.

Kim Hill, the Chesterfield Food Bank CEO, told ABC 8News, “a lot of Chesterfield residents are showing up to get food would be an understatement — they’ve been averaging over a million meals a month.”

The line on Route 10 for the Chesterfield food bank is currently a double wide line that stretches nearly half of a mile pic.twitter.com/785yt75KT7