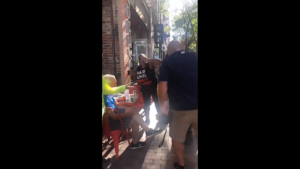 Video footage showed one protester swiping a man’s beer and downing it.

Three Black Lives Matter activists who confronted an elderly couple at a restaurant in Pittsburgh earlier this month while yelling “f**k white people” have been charged with harassment, conspiracy, and disorderly conduct.

Video footage of the incident which went viral shows the agitators yelling obscenities at diners outside the Sienna Mercato restaurant on Penn Avenue on September 5.

One of the individuals, Monique Craft, is seen on camera swiping a beer from one of the patrons and downing it before another protester knocks the glass to the ground. Craft is wearing a “Nazi lives don’t matter” t-shirt.

“Misdemeanor charges were filed against Monique Craft, 35, Kenneth McDowell, 33, and Shawn Green, 24, on Monday. It’s unclear whether they’ve been taken into custody,” reports the Daily Mail.

The charges include harassment, conspiracy, and disorderly conduct. Craft was also charged with unlawful taking after she admitted to drinking the man’s beer.

McDowell was identified as the ringleader of the group and used a megaphone to shout obscene slurs at other diners outside the restaurant and is also captured on other footage getting into an altercation with a McDonalds manager. He has also been charged with “possessing instruments of crime.”

There have been numerous different incidents at restaurants where BLM agitators have harassed and intimidated diners, including one infamous case in which a mob surrounded a woman because she refused to raise her fist.

In the age of mass Silicon Valley censorship It is crucial that we stay in touch.

I need you to sign up for my free newsletter here.