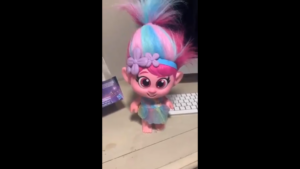 A “Troll” doll made by Hasbro was revealed to carry a secret button on its “private parts” that made the children’s doll “gasp and giggle” when pressed. The revelation of the button and its inappropriate sexual connotations sparked a social media firestorm and a Change.org petition that has amassed nearly half a million e-signatures.

The “Trolls World Tour Giggle and Sing Poppy” doll was exposed across social media, accumulating tens of thousands of engagements. The question “Is @Hasbro normalizing grooming & facilitating child abuse?” was asked in one tweet that showed a video of a disgruntled mother showcasing the doll.

The narrator to the video exposing the doll’s button began by saying: “I wanted to do a quick video because I find this disturbing, and I find it something that needs to be shared.

“As you all know, stuff that has been going on in the world about the sex trafficking in kids and the stuff that is thrown in our kids’ faces to kinda groom them, and make them kind of a little bit more oblivious to things that are really happening.”

The narrator goes onto explain: “It was my daughter’s birthday a couple of days ago and she turned two. And she was given this gift: a little Poppy doll–it is adorable.”

POLICE: PRO-BIDEN ARSONISTS DESTROY FAMILY’S VEHICLES & GARAGE OVER TRUMP 2020 FLAGS ‘Biden 2020,’ ‘BLM,’ and anarchy symbol graffiti spray-painted on garage Adan Salazar   A Minnesota family whose garage and vehicles were destroyed by a massive fire claims they were targeted by ...