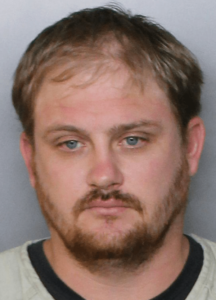 Charlotte County, FL- Around 9:50 on Saturday morning, an Englewood resident on their way to work discovered a young child who looked to be approximately 4 years of age, sitting alone in front of a local business. When they went to talk to the child, he began to cry. The citizen who found the child attempted to ask questions to further understand the situation and why he was alone. The child attempted to run away but she was able calm him down and called 911.

When deputies arrived, the child only stated that when he woke up, his father was gone so he decided to go for a walk. He mentioned that he lived in a blue house with a gold van and that his father was away at school. No identifying information given.

Deputies in the area began conducting a neighborhood canvass searching for a blue house with a gold van that could possibly be the child’s home.

The Department of Children and Families was called and responded, which ultimately helped identify the child’s father as Eric T. Sickler (03/13/1988).Deputies attempted to make contact at the home located on Tramore Avenue in Englewood but arrived to find the door unsecured with no one inside.

Shortly after the father arrived home from DUI school in Venice, deputies returned to the Tramore Avenue home. Sickler stated he had searched everywhere for the child but was unable to locate him. The father was notified that his child was safe at the District One office with law enforcement and DCF.

After interviewing Sickler, he was arrested for Neglect Child without great bodily harm for failing to provide the care, supervision, and necessities to maintain a safe and healthy environment.

We would like to thank the community for coming together to assist with the safety and well being of this child. For sharing any information you had, for your concern, and for the generous woman who was in front of a deputy in the McDonald’s drive-thru who paid for a Happy Meal, unknowingly for this child.

POLICE: PRO-BIDEN ARSONISTS DESTROY FAMILY’S VEHICLES & GARAGE OVER TRUMP 2020 FLAGS ‘Biden 2020,’ ‘BLM,’ and anarchy symbol graffiti spray-painted on garage Adan Salazar   A Minnesota family whose garage and vehicles were destroyed by a massive fire claims they were targeted by ...