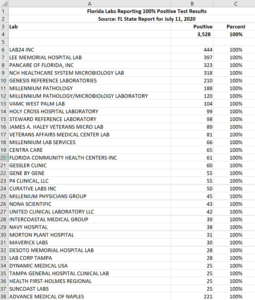 Coronavirus testing numbers are being questioned after hundreds of labs in Florida reported 100 percent of people tested were positive for COVID-19.

On Saturday, Florida Atlantic University professor Rebel Cole released a list of several labs in the state that reported zero negative results for over 3,500 COVID tests, which he called a “scandal begging for press coverage.”

This is a scandal begging for press coverage:

Without these, today's "percent positive" would fall from 12.6% to 8.7%. pic.twitter.com/l4AZJISLim

A local media outlet last week also picked up on the questionable results, with one doctor calling the numbers “fishy.”

“We’ve got what’s called a denominator problem – the denominator is the number of negative cases, or negative tests, or total tests, and the numerator is positive tests,” Dr. Jon Ward told WJHG.

“I looked at it and it [PanCare] showed 280 positives and zero negatives, and that just came up really fishy because I knew a lot of people who had gone to PanCare and tested negative.”

“Places like Lab24 Inc and Lee Memorial Hospital Lab also did not present the number of negative cases.”

The department of health in Bay County told WJHG they were working to get the data on negatives.

“The Florida Department of Health continues to work to be as transparent as possible. We are working with PanCare to get the negative antigen data for reporting purposes as quickly as possible.”

Coronavirus digest: Belgium to scrap face mask rules - DW The Belgian prime minister has announced that wearing masks will not be mandatory throughout the country starting next month.   Belgian Prime Minister Sophie Wilmes has said that wearing face masks will no longer be compulsory from Oct...